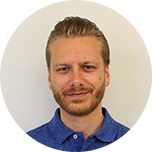 During my Master’s in Visual Sciences, I became interested in postural stability during visual perception of movement in immersive virtual reality (Cave Automatic Virtual Environment – CAVE)

During my doctorate in biomedical sciences, I became interested in visual-perceptual deficits following mild traumatic brain injury. To do so, I measured contrast sensitivity thresholds along with electroencephalographic activity.

Parallel to my doctorate in biomedical sciences, I completed a degree in optometry.

I’m currently working, in the context of a post-doctorate in neuroscience, on continuing my research in electroencephalography that I began during my doctorate in biomedical research. I also work as an optometrist.